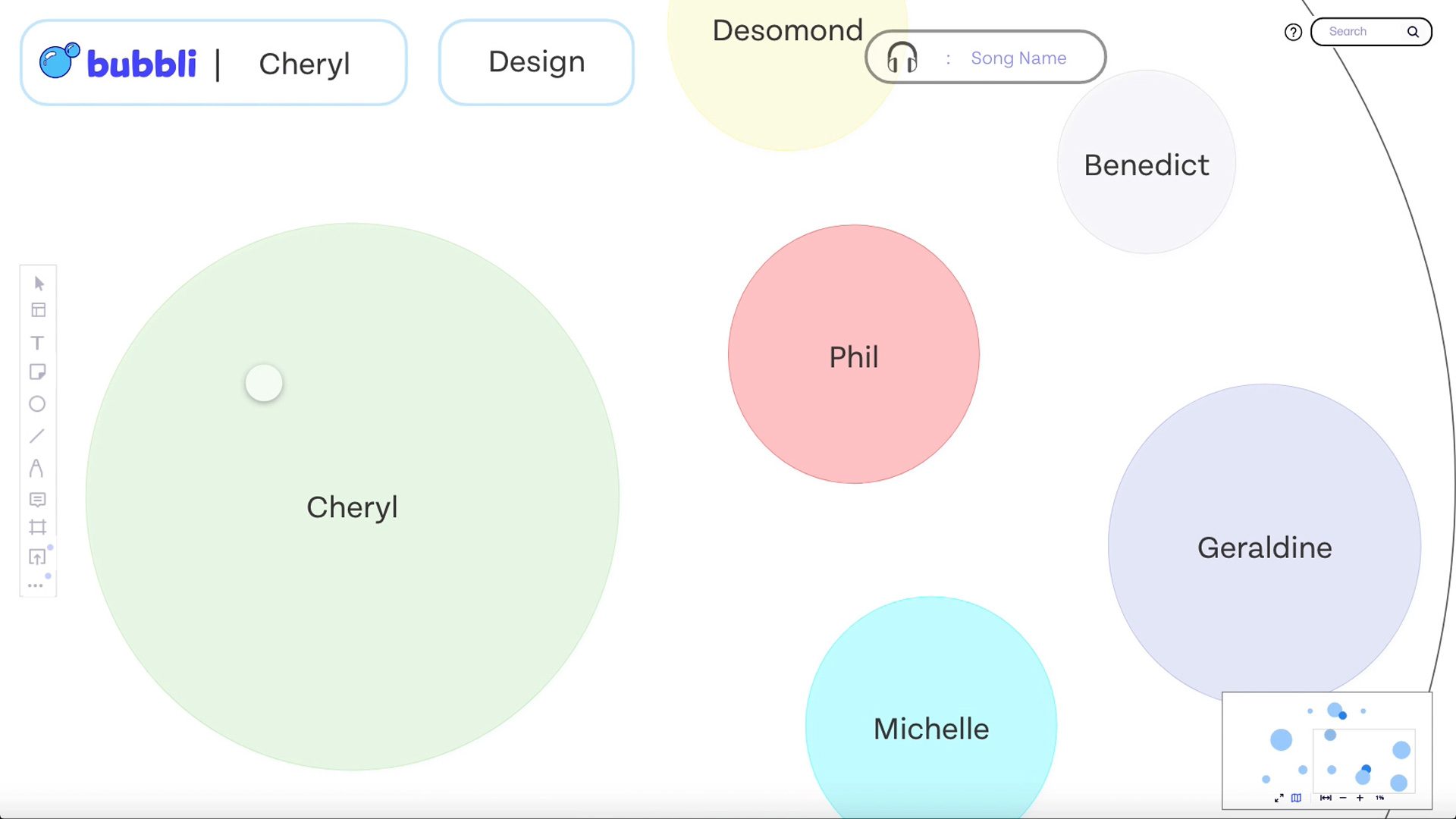 What if remote collaboration technology fostered a sense of community and trust?

Bubble Up Your Next Big Idea

Bubbli is interaction design project for professional creatives to connect with others, build a community and collaborate on a project. Bubbli is a plugin for Miro, integrates with Zoom for synchronous collaboration and streams all major music streaming services for a shared ambient experience amongst project collaborators.

How can ArtCenter students collaborate creatively when we cannot work in the same physical space? Can we create screen-based tools, platform that foster innovation, ideation and collective work for students at ArtCenter? What would this experience be like?

Our research focused on changes to the work environment as a result of the COVID-19 pandemic and an article from the New Yorker was particularly relevant to our efforts. Also, Club Penguin provided us the initial idea for synchronous interactions and the focus on establishing a sense of community. During the synthesis of the interview results the team identified six categories that assisted in the group’s creation of three personas, these were: 1. Trust; 2. Forms of Communication; 3. Inspiration; 4. Adaptation; 5. Interpersonal connection; and 6. Networking. The UX vision, building genuine connections, a sense of community and trust amongst co-collaborators, was established by synthesizing insights and discussing a vision for collaboration. 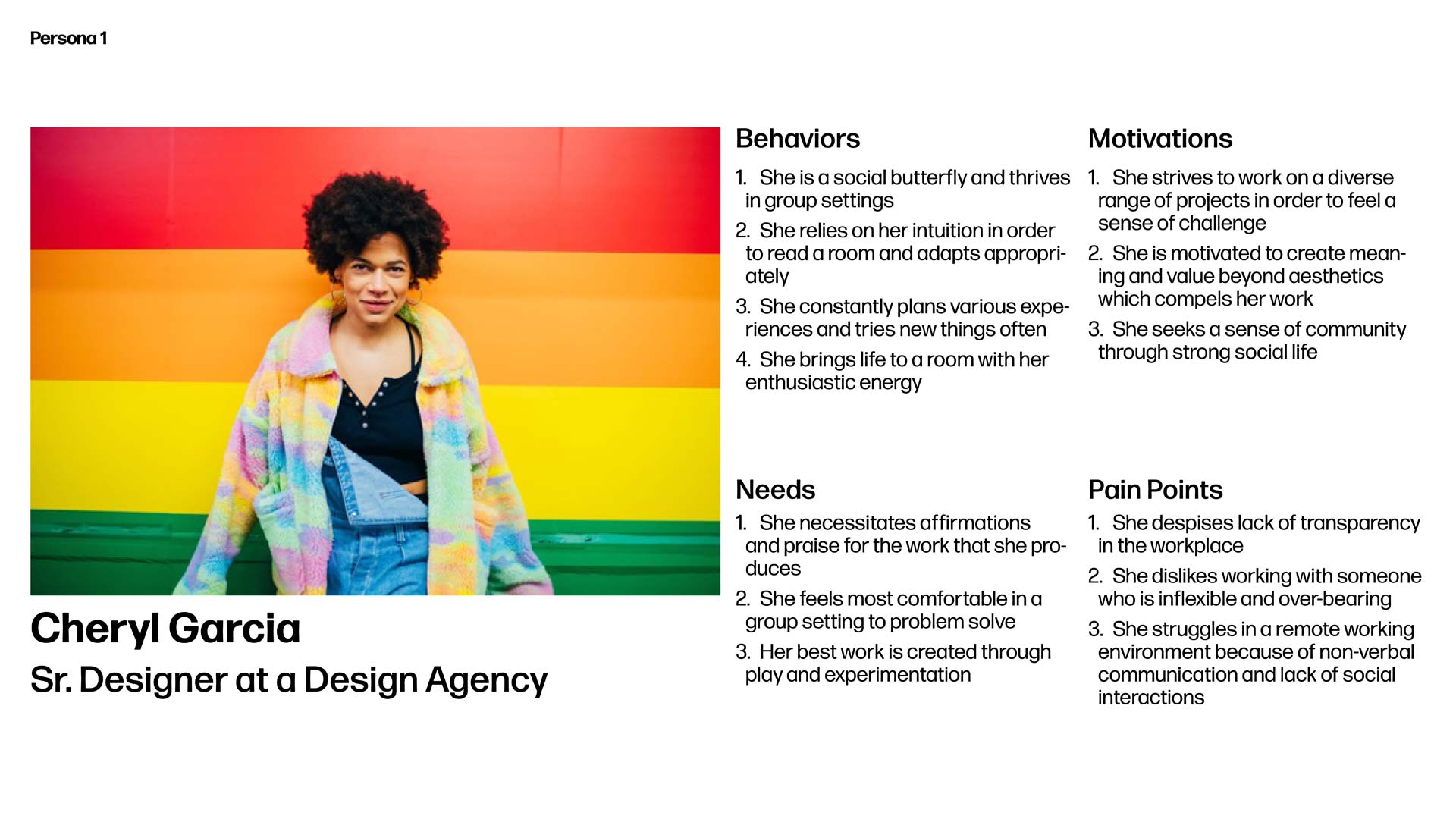 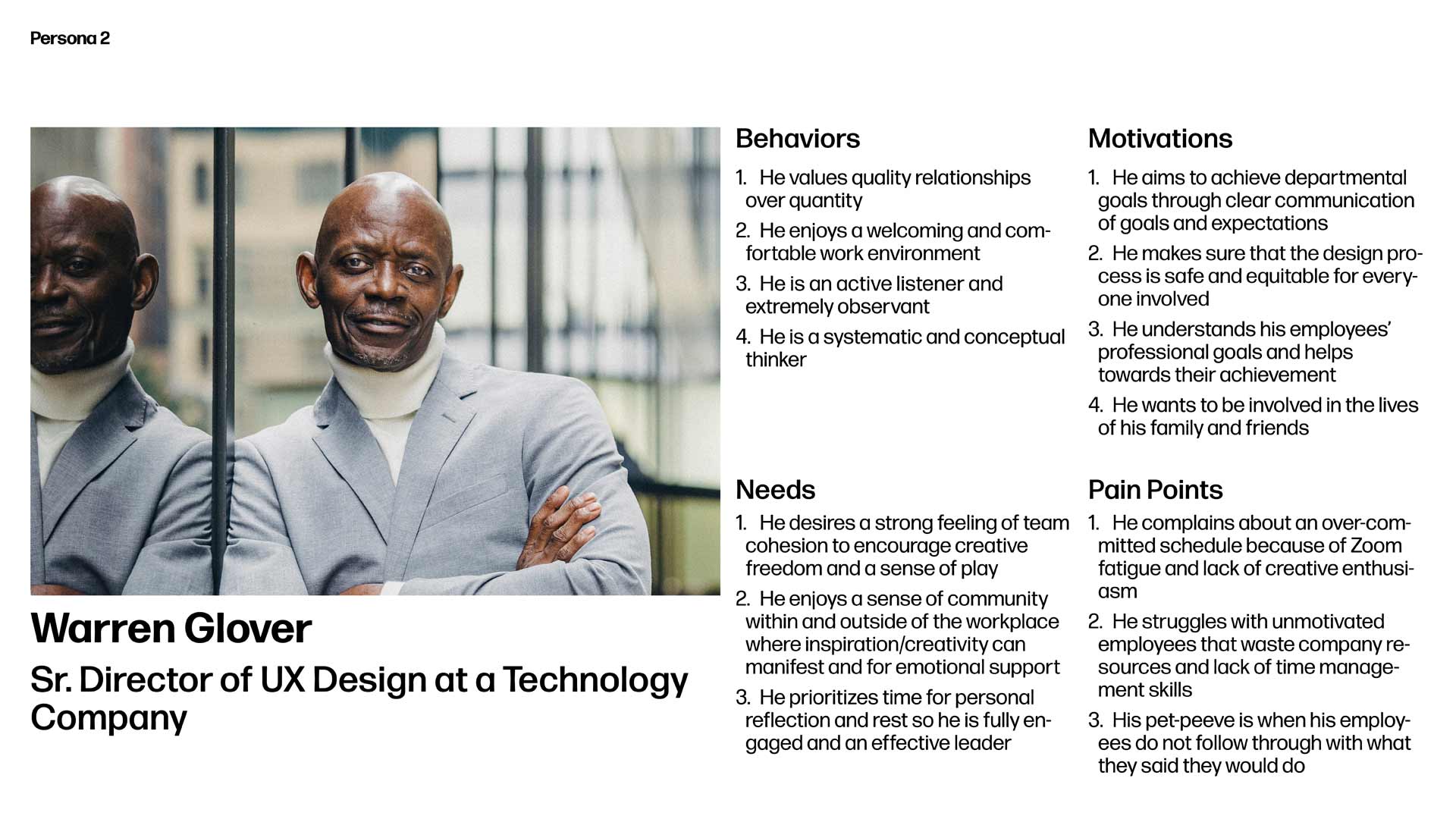 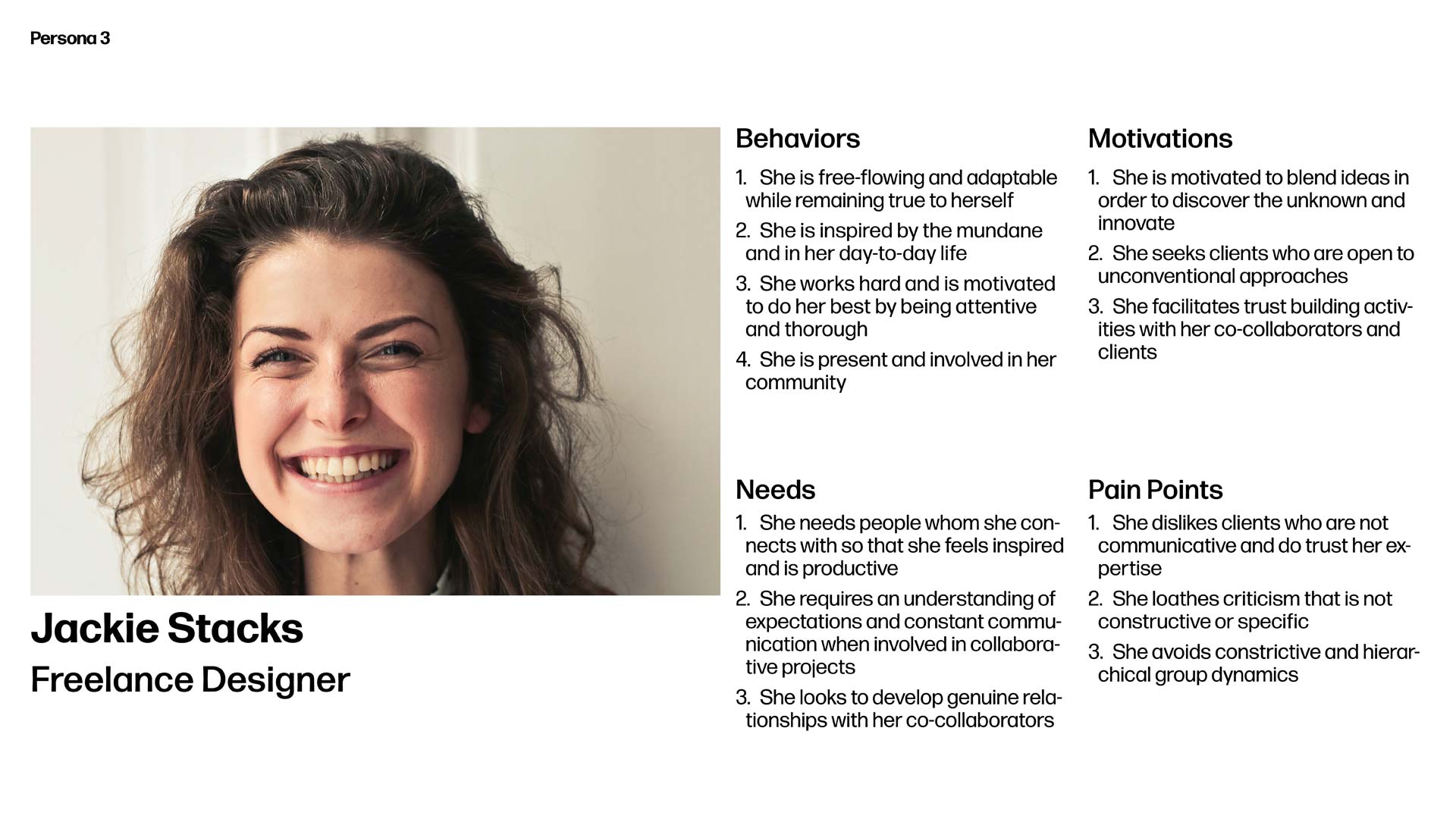 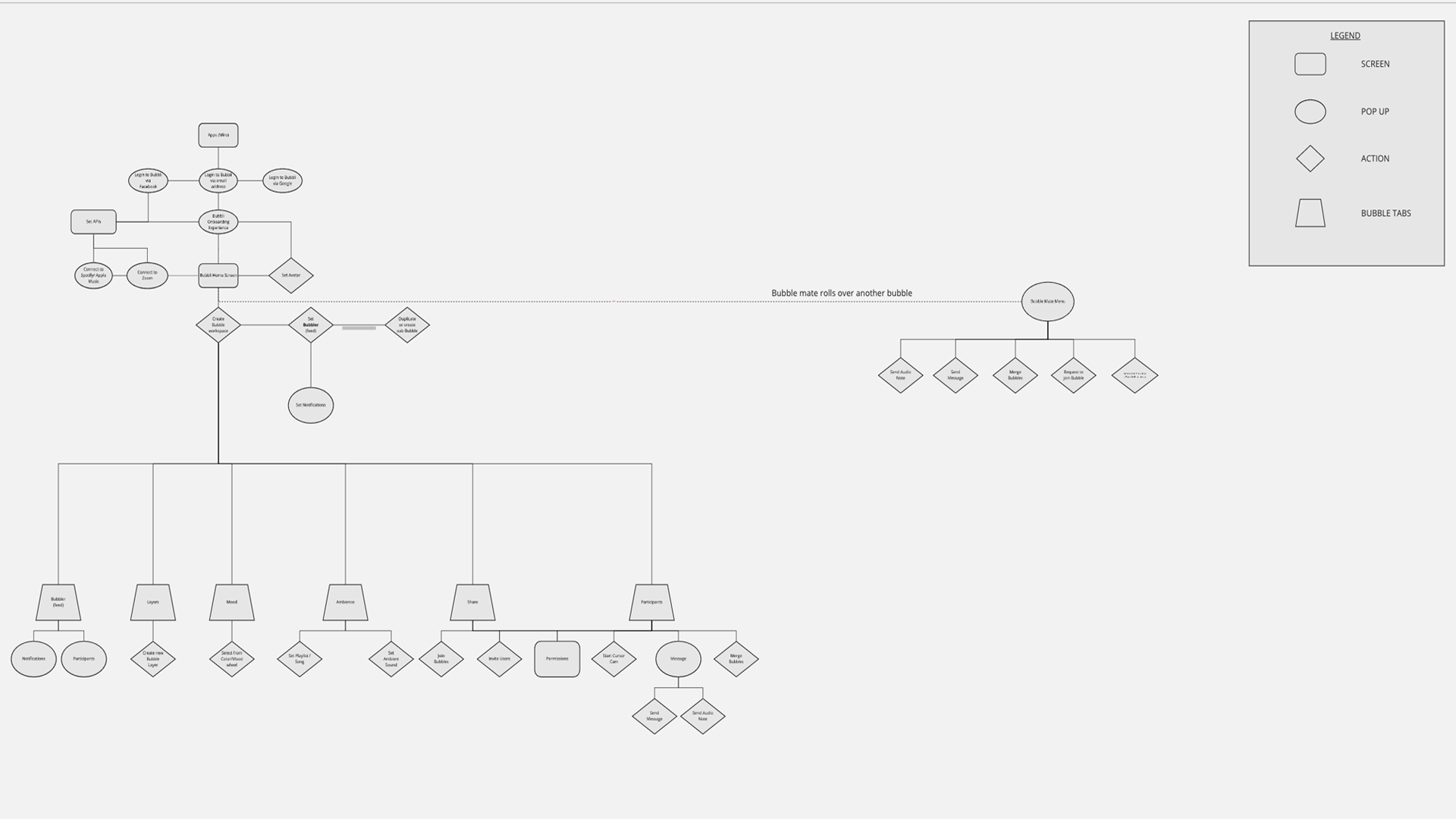 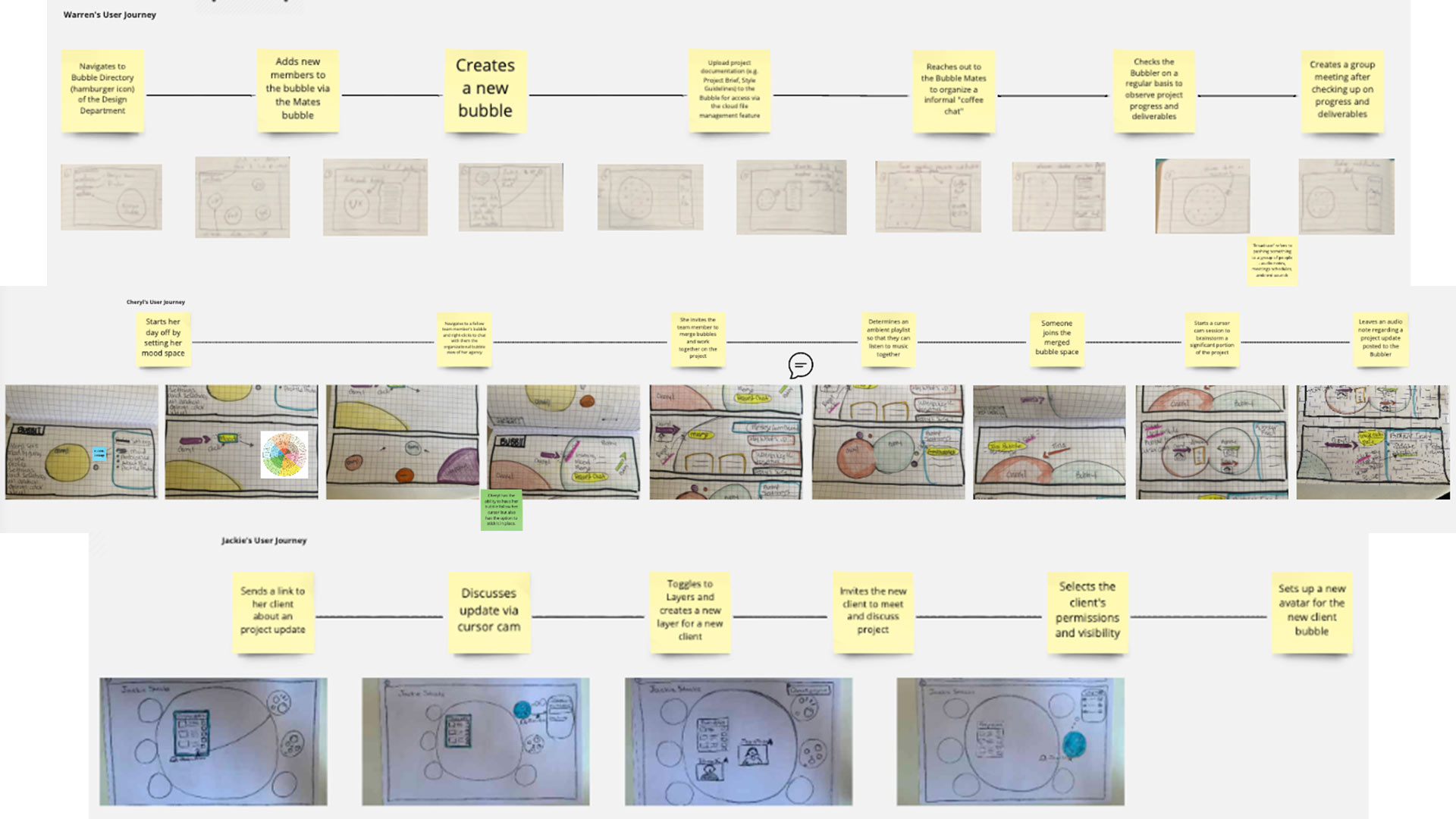 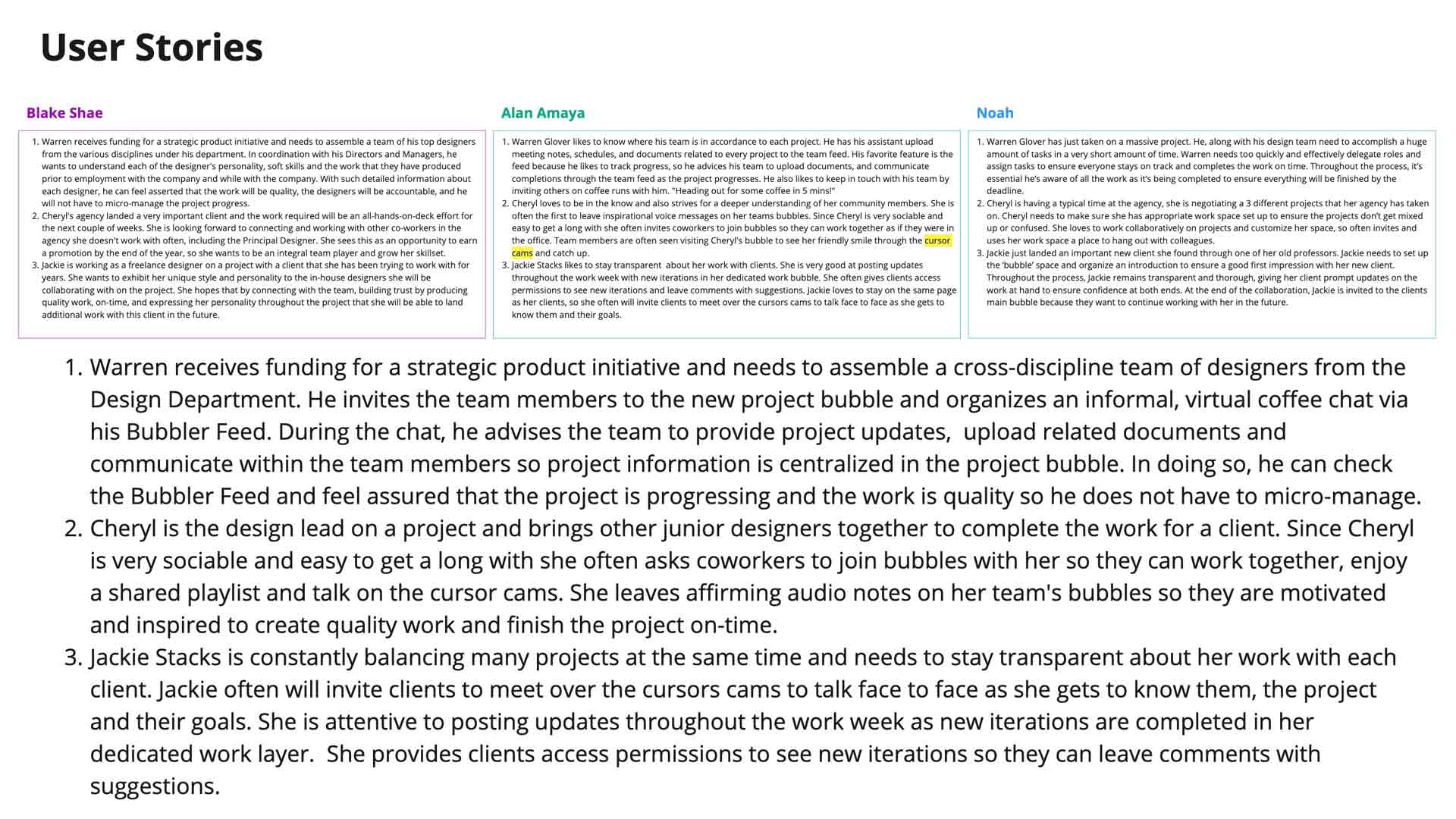 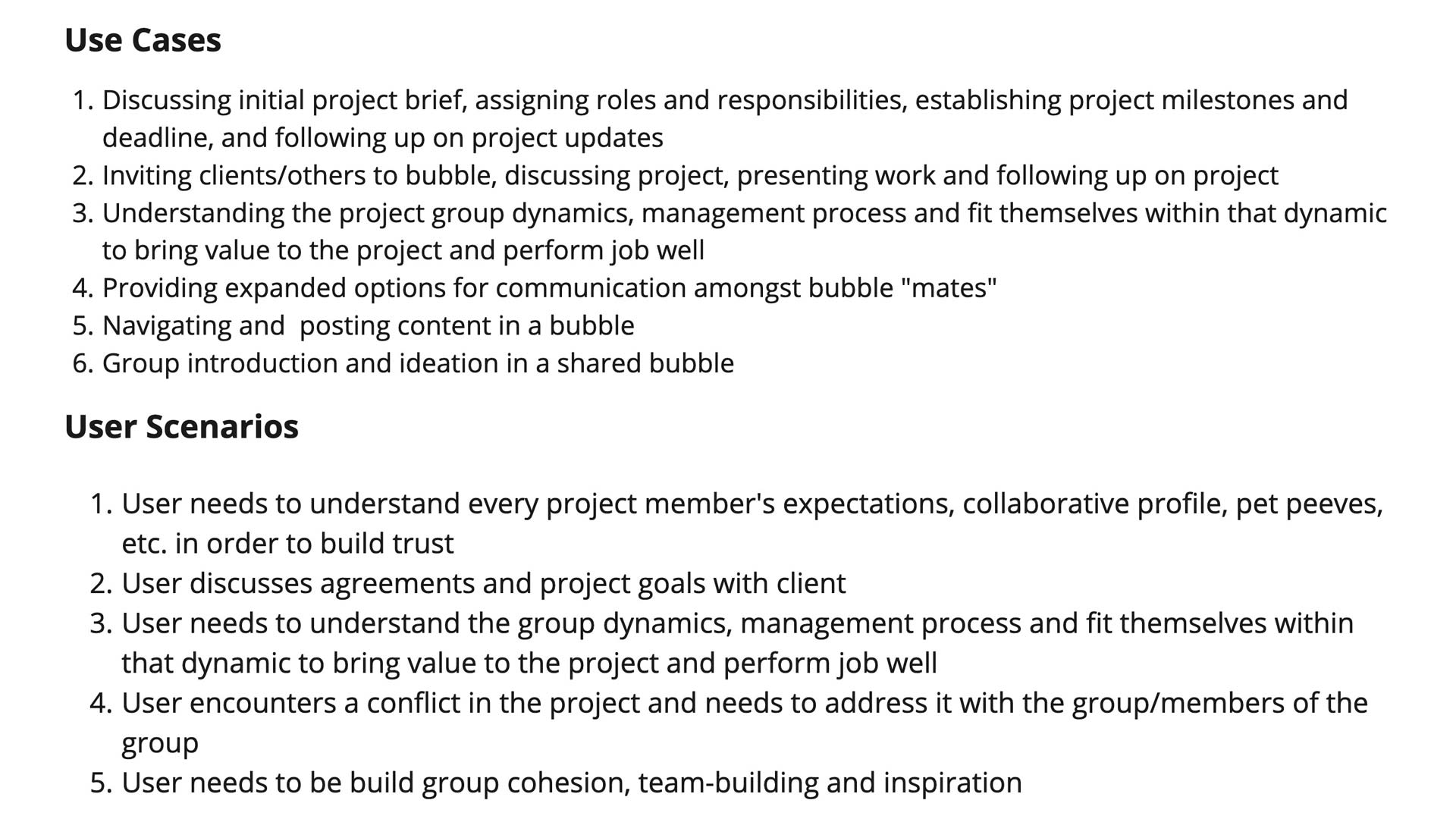 Use Cases and User Scenarios 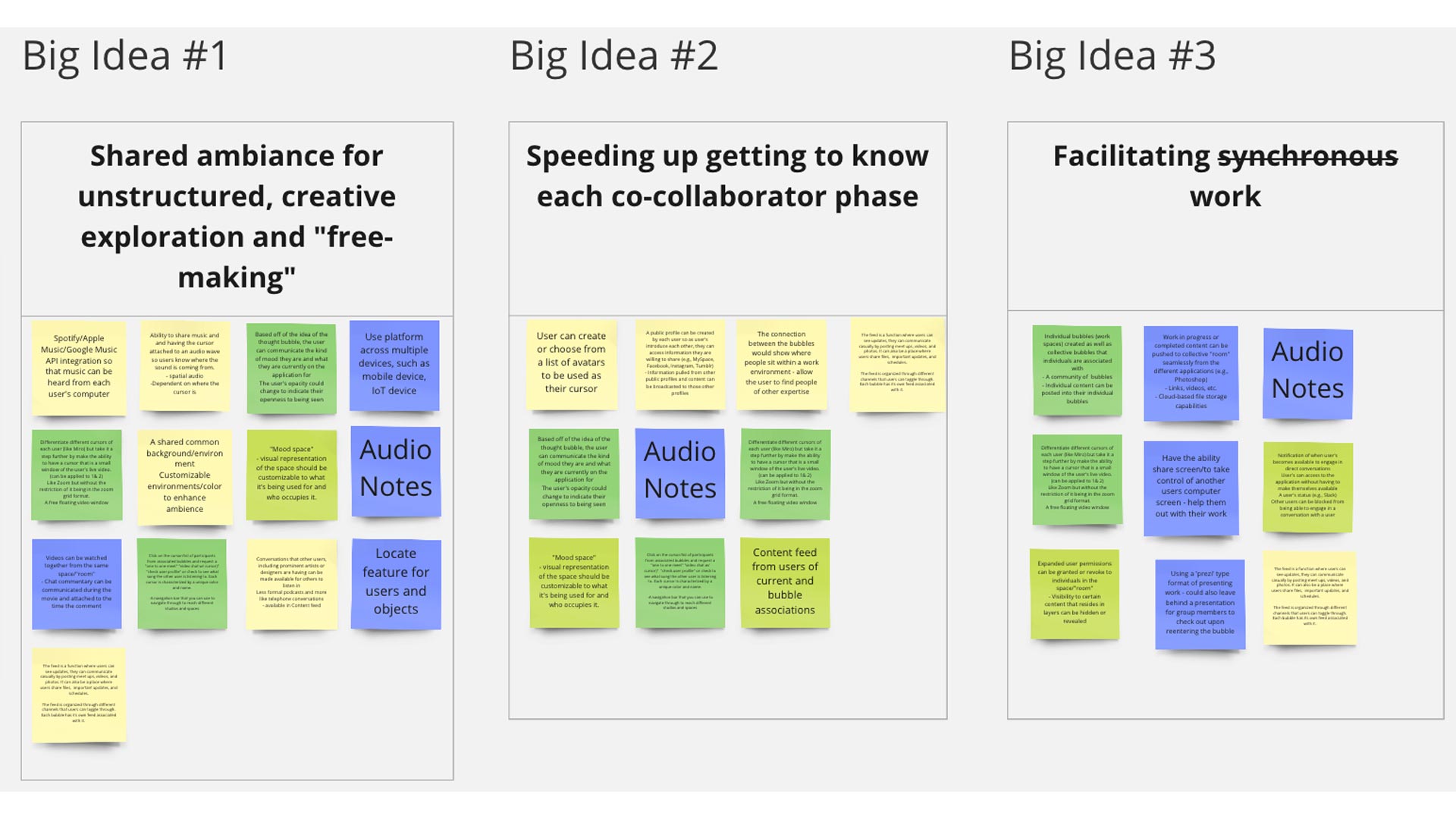 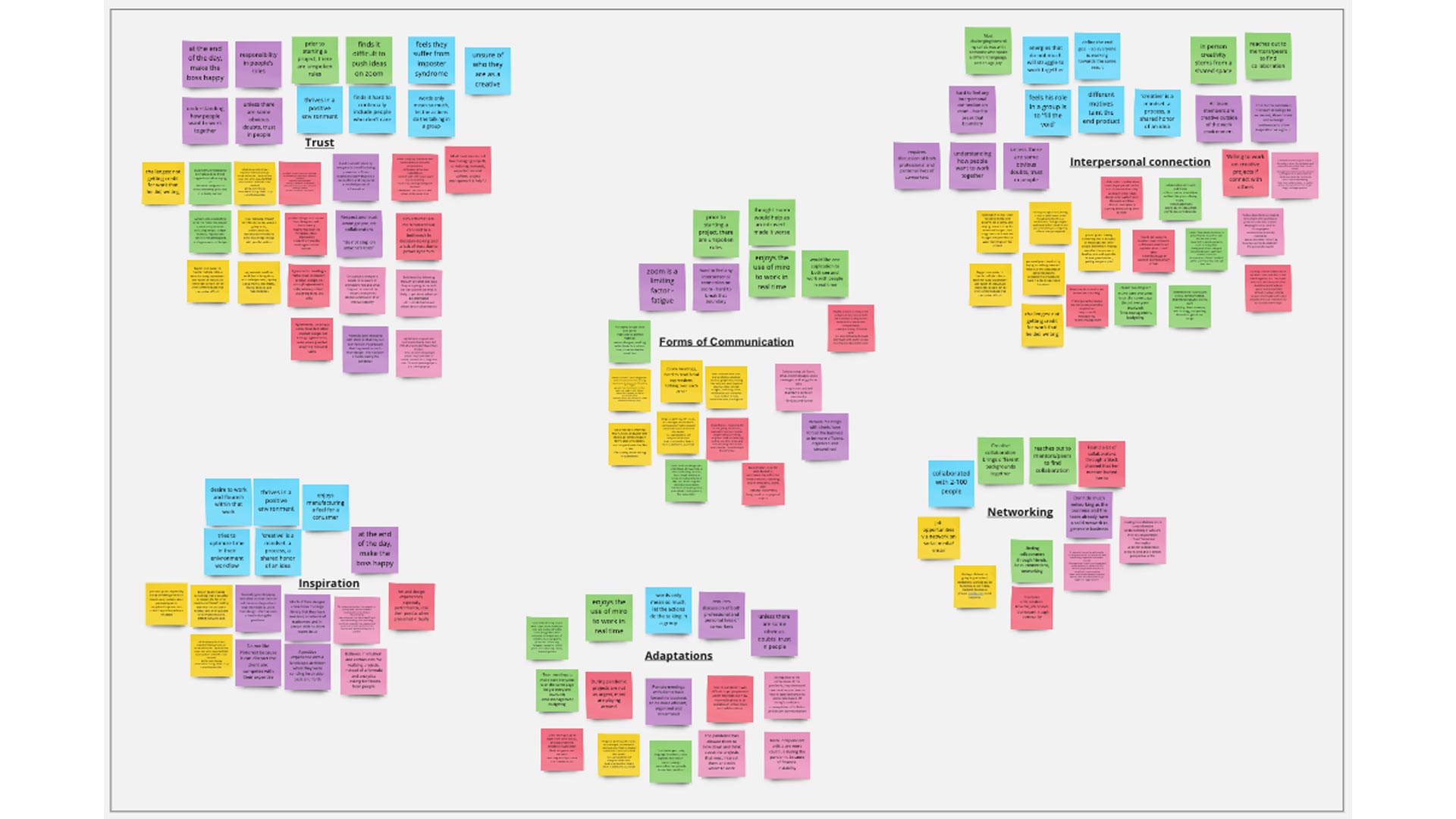 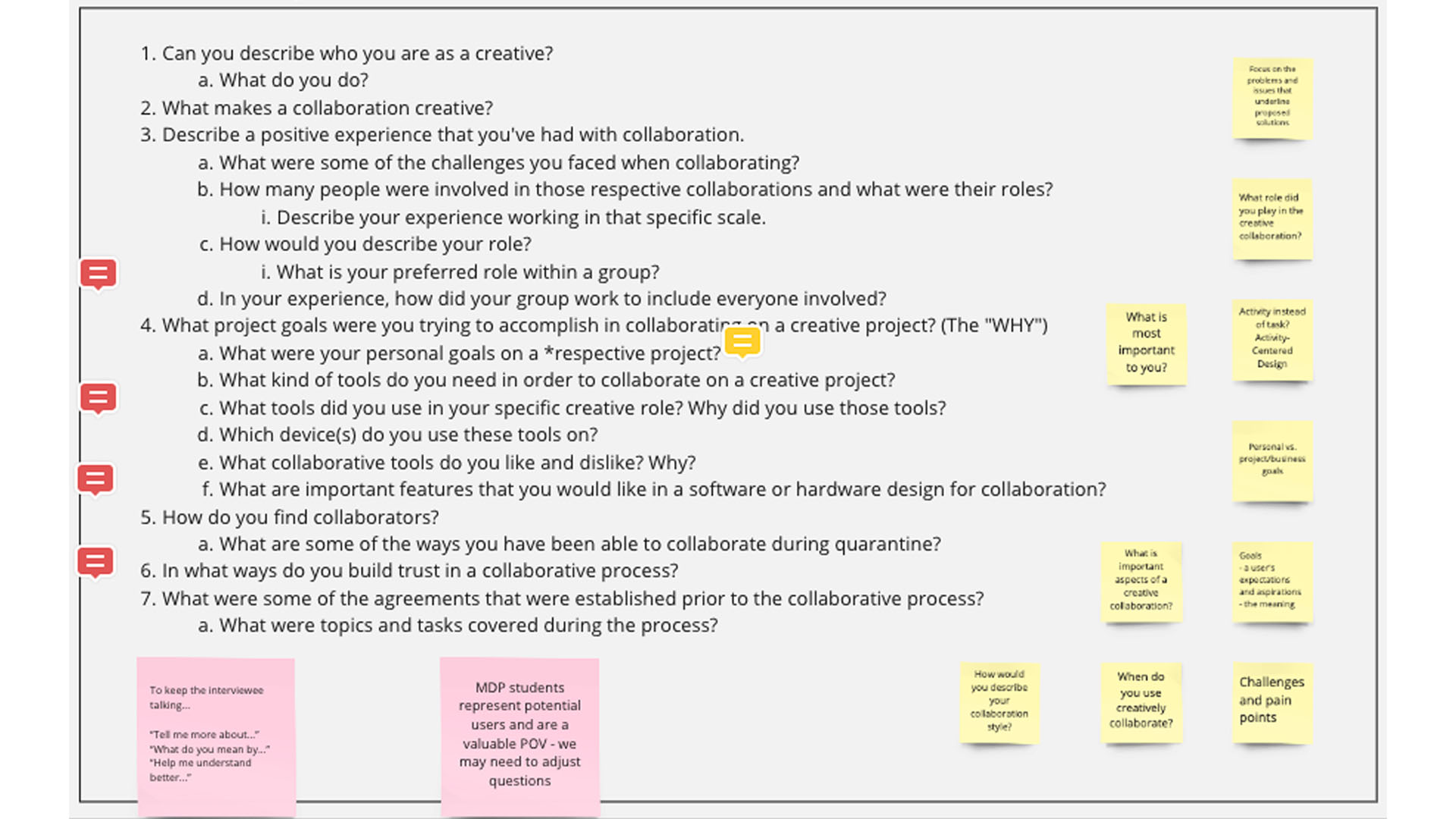 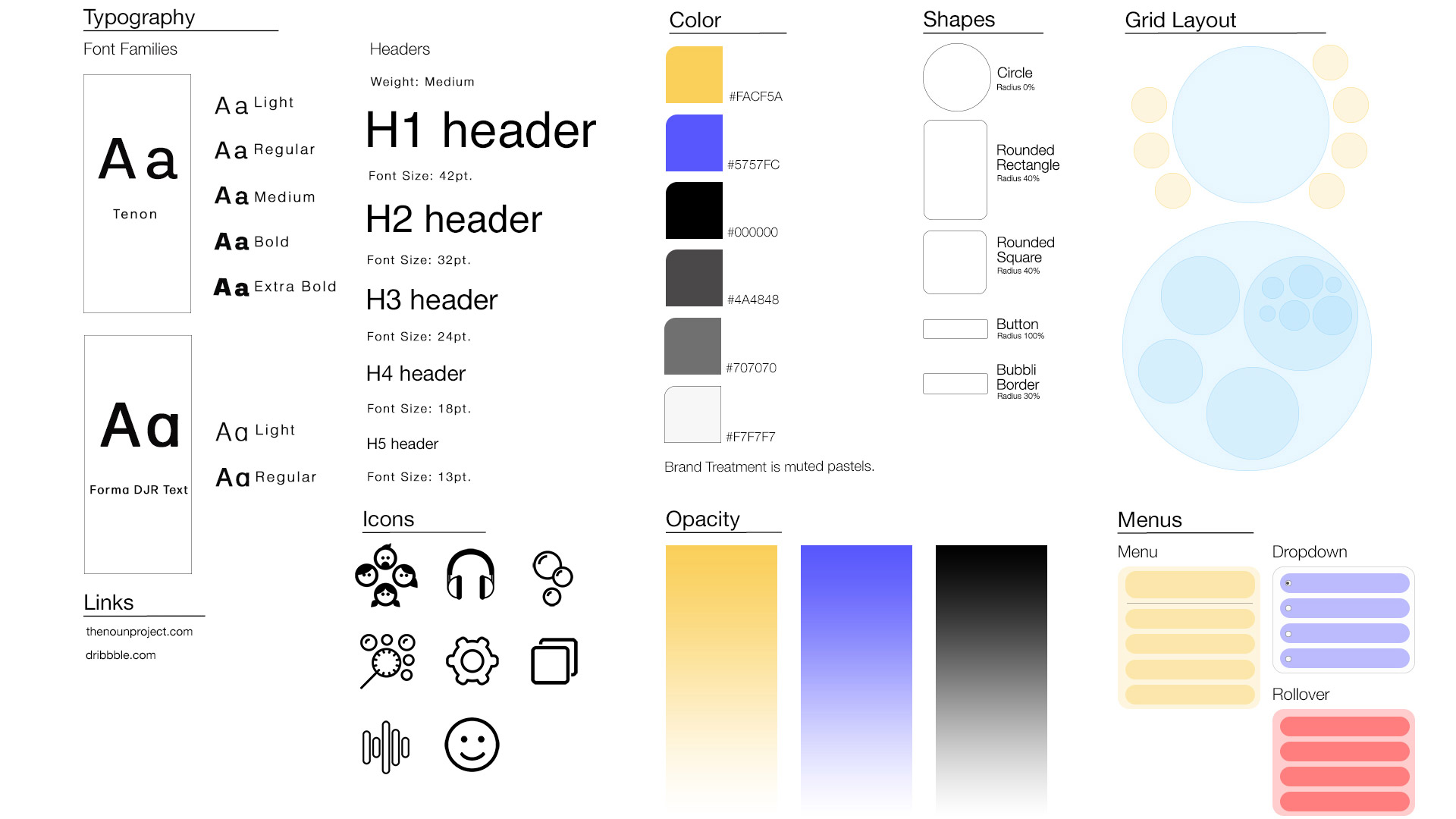 Throughout the 7 weeks of the project, the team was assigned several weekly deliverables which required a great deal of time and effort on the part of each team member. To ensure that we arrived to class prepared, the team met multiples times throughout the week, and during each meeting, we discussed every detail thoroughly, by prompting questions, clarifying interpretations and asking for input. We were very communicative and each team member contributed a great deal during the meetings. The highlight of the project was the semblance of studio life in that we communicated every day and when we met over Zoom we would engage in small-talk. The whole experience provided me an opportunity to build a community with my classmates.

The interaction design method was followed precisely, and as a result, the team generated an innovative idea to aid in professional creative collaboration efforts. The user research, persona development and synthesis of the big ideas are the strongest as. Although it was a lot of work in pulling out insights from our user interviews, it was integral to Bubbli’s features and functionality. Once we got to the phase when we were sketching and prototyping in low-fidelity, it was easy to communicate why, how and for whom. In the end, this project solidified my desire to pursue a career as an UX and Interaction designer. 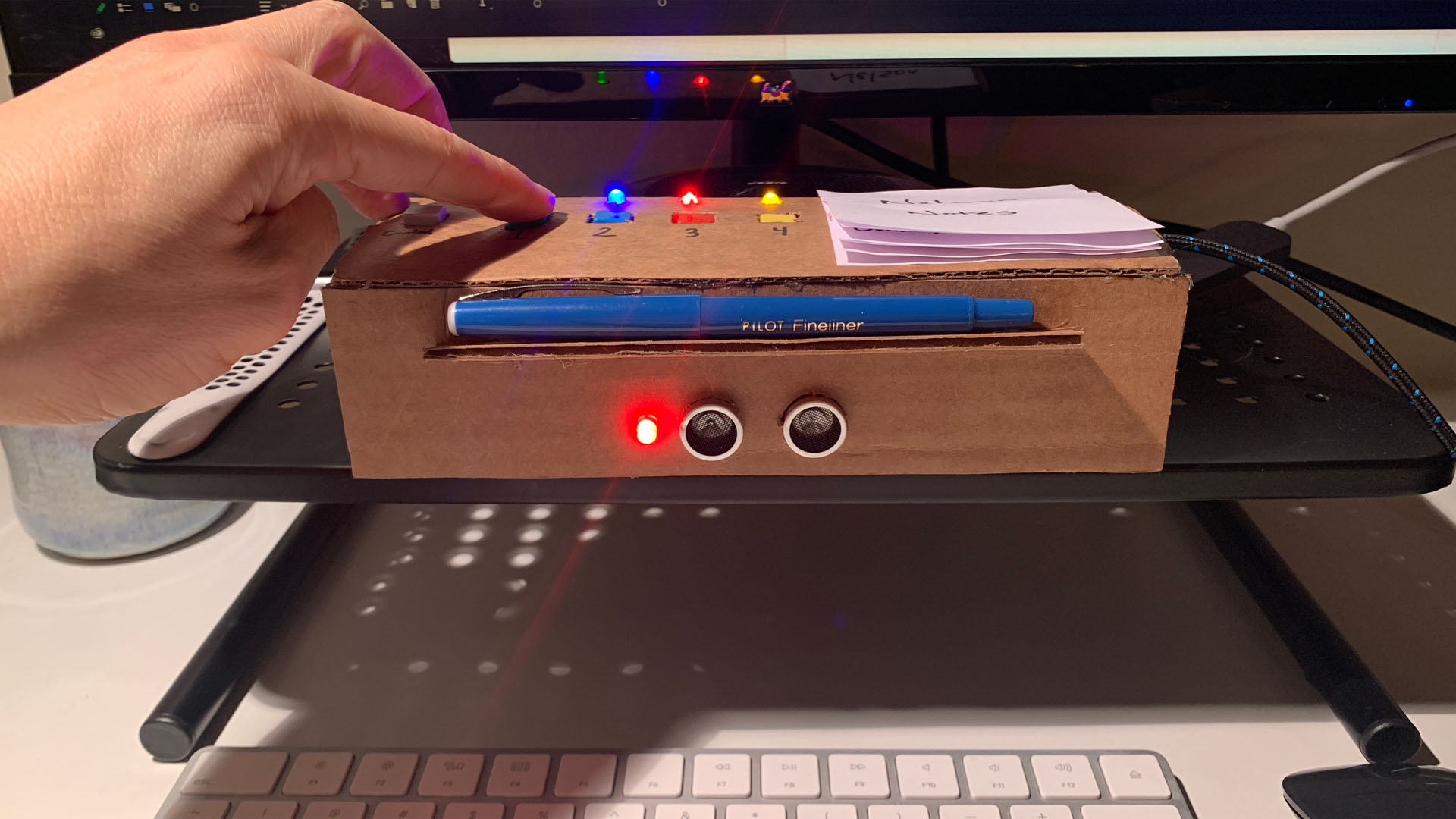 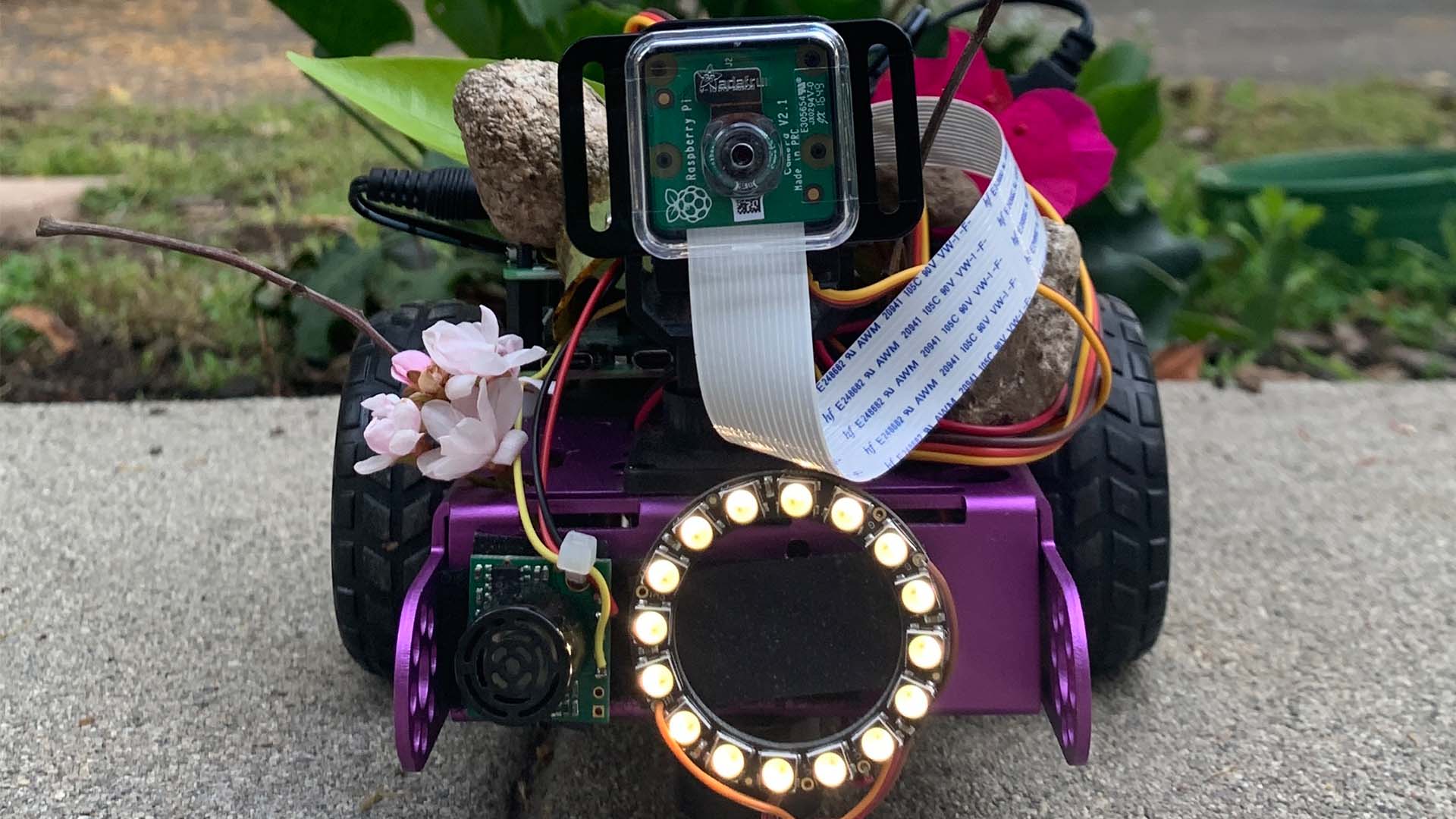